Corregidor is a big rocky island in the Philippines located 48 kilometers west of Manila that is vitally positioned at the entrance of Manila Bay. This fortress stands as a memorial for the Filipino and American defenders who bravely held their camp against the staggering number of invading Japanese forces during World War II. This 12 facts about Corregidor Island will help you plan out your trip, with ease.

The terminal is located beside 7-Eleven convenience store across Manila Bay Harbor. Parking fee has a fixed rate of PHP30.00 on weekends.You can leave your car beside the terminal complex, even though it’s an outdoor parking, security guards are around the area to keep a close eye on your vehicle.The Check-in counter opens around 7 am, and boarding starts at 7:30 am. Estimated time of departure is 8:00 am. Relax before boarding, and make sure that you have the necessary equipment for your trips such as sunblock, water, and snacks.

It takes one hour and a half ferry ride to reach the island. During the ferry ride, there will be a short introductory film about the history of Corregidor Island, so pay attention to this!. If you want to avoid tourist during the ferry ride make sure to sit on the ferry. Upon arriving, you will be greeted by the staff with a simple dance number. Just remember to book in advance especially if you’re going to the island on weekends. The indoor seats have enough leg space and ample cushion to hold you in place. There’s no storage space for your backpacks so you will have to place it on top of your lap Take note that the seats located outdoors do not have cushions on them. There’s a snack bar at the first level of the ship. They sell coffee, noodles, chips and other beverages (except for alcohol)!. 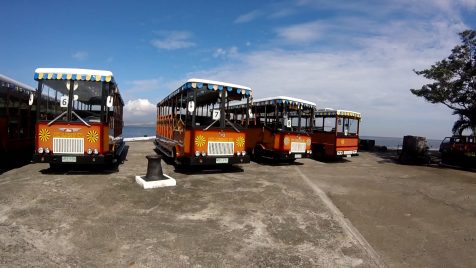 The island is breathtakingly beautiful. The view of the coast which surrounds the island made this military fort a unique destination.Upon boarding our bus we were greeted by our personal tour guide “MAR” who is a charismatic guy, and a very fluent English commentator. Depending on your bus assignments, you could have a specialized tour guide of your own dialect, making the trips tourist friendly. A total of 15 Buses were available that morning, and each bus had its own route going through the island. Some buses had Chineses, Korean, and Japanese tour leaders that accompanied tourists. 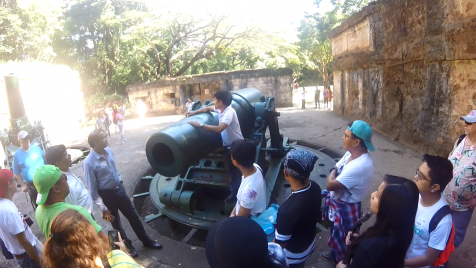 The most notable part of our trip was the mortars and gun barrel garrisons. This was used hand in hand by the military, giving the island its outstanding defensive line against the Japanese. Our first destination was the “Battery Way”, and it had 3 Mortars facing opposite directions, with a launch angle of 45 degrees to 70 degrees. The tour guide carefully explained how each shell was carried out from the ammunition storage. The simple mechanics of a pulley system made it possible, and the right coordination from spotters located in different parts of the island made the mortars accurate. 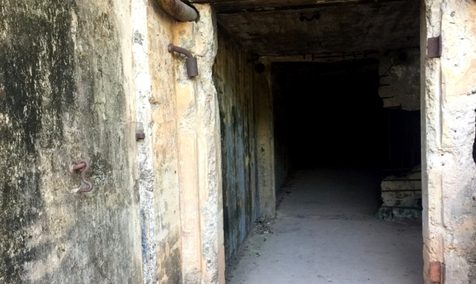 Each destination is given a 10 min free and easy time for pictures. You could also follow the tour guide for a more detailed description of places for each site. The underground network tunnel is one of the best-guided tours on the island because it gives you a good grasp of its historical timeline.

The tunnel entrance at Battery Hearn was dark, and you are forced to light up your pathway using your phone. Be careful with debris along the path, and objects hanging off the roof because you might stumble upon a steel bar if you’re not paying attention. The tunnel is amazingly filled with bats and some lizards, which will give you the chills.

The most anticipated part of the tour on the island mile-long long barracks. This historic landscape travels you back in time which is usually popular with travelers. The tour guide will give you 5 minutes for picture taking, and you’re limited outside of the premises due to unstable condition of the place. Just across the barracks is the Pacific war memorial, noticeable for its huge marble dome-shaped building built to remember our Filipino and American Fighting men, who fought against the Japanese, and won.

(7) LUNCH BY THE LIGHTHOUSE TOWER 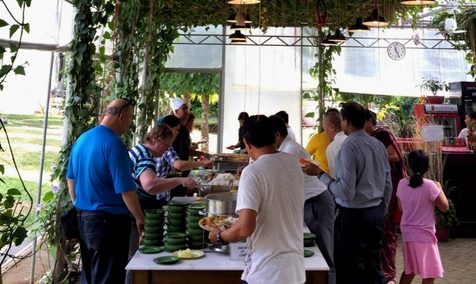 We ended our afternoon tour at the lighthouse for a quick lunch break and a souvenir shop tour.Lunch is served buffet style with welcome drinks for all guests. The screw pine juice is a good thirst quencher that has a sweet jelly structure. The best drink off the menu was the ‘kamias shake’ notable for its sour fruit picking. Local Filipino food was served from the popular “Pancit Canton”, “Beef Adobo” and several rice cake desserts to fill up your appetite from the long excursion!. 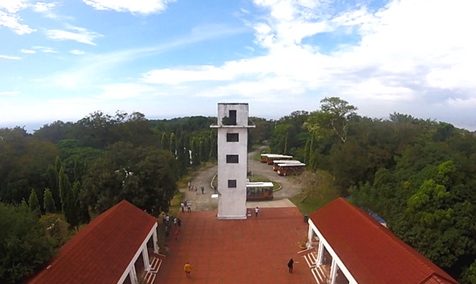 The Lighthouse was located in the middle of the island. Going up the viewing deck was challenging because of its steep stair climb which was worth it because you get to see the whole island. The slightly tilted deck is not good for travelers who are afraid of heights, but it’s worth the experience. The view from top follows out a landscape photo of the whole island.  Grab a souvenir in one of the local shops beside the lighthouse filled with wood carvings, shirts, and miniature garrisons to remember your stay on the island!. 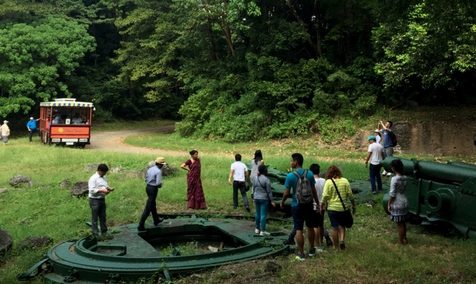 The next destination was is Battery Geary. It is located near the lighthouse, and this garrison had a huge mortar mount and bunkers beside it. The war brought it down to shackles, leaving parts all over the island. Some parts went as far as 20 off the shore. Debris can be found near the road and huge parts of the mortar were put inside the bunkers. Our tour guide deliberately explained the chances of hitting this battery was slim to none. Out of the 16,000 bombs dropped on this island, one bomb managed to land on the ammunition storage and ignited a huge explosion, making it the second biggest explosion on the island. 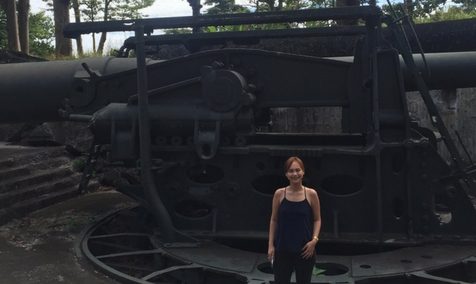 The place had two mortar strongholds located on the opposite sides of the complex. Known as the “disappearing gun“, it showed its massive garrison and its pendulum switch mortar system that paved way during WW I. We had a tour inside the building connecting both guns, it showed 10 different rooms covered with dust and mold. The place had a grime smell to it, and dust flies flying out for each that we make through the garrison. 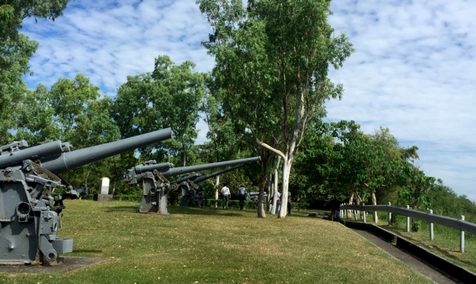 Another nifty destination was the Japanese memorial site located at the tail end of the island. It had a wonderful view of Cavite, and Carabao Island. The sight gives tribute to for the fallen Japanese soldiers who fought in Corregidor Island. They have souvenir stands around the complex if you need to make another stop before going to the next destination. Garrisons are placed near the garden protecting the rear view of the island making it an all around Fort!. 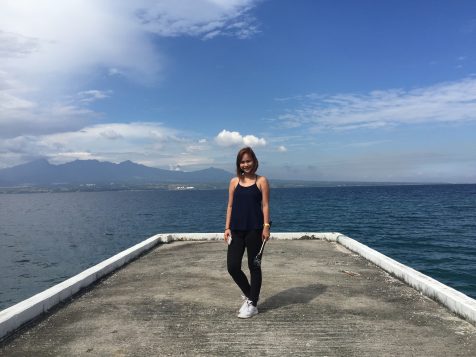 Their coastal road had a wonderful view of their seashore. History was made at this dock and is the best place to take pictures. Lorcha Dock is known for General Douglas MacArthur’s statement before disembarking to Australia saying, “I Shall Return” as he leaves his comrades before the full surrender of Corregidor to the Japanese. 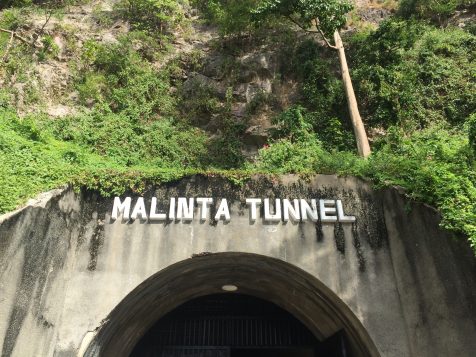 The tour ended with the island’s best tourist attraction which was the Malinta Tunnel Light show. You need to pay 200 pesos to get on the tour. If you like history and a little gunpowder in the middle, then it’s worth giving it a shot. The attraction is only 30 minutes long, and you need to stand up the whole time you’re watching. Inside this vast black tunnel, the operators will guide you through the history and lifestyle of the island.

It’s around 2:20 pm when we finished our last stopover and left the island around 2:40 pm. With remarkable quotes from our tour guide, we sail back keeping General MacArthur fine words in mind saying “I shall return “. The ferry back to Manila was a quiet one because everyone was dead tired from the humid weather of the islands.I would definitely recommend this trip to my friends and hope to see more improvements from the islands tour attractions.